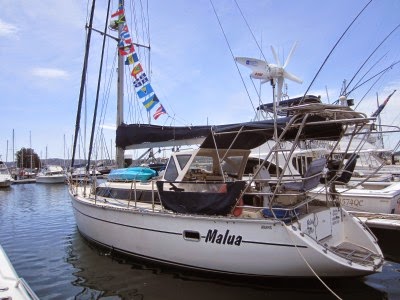 I entred Sydney Harbour on 7 November after a interesting sail south along the NSW coast.  A severe thunderstorm off The Hawksbury reminded me how dangerous it can be close to shore.  The rain came down so hard I could not see the bow and the winds as always in these conditions came from the south then switched to the north.  As the wind and rain started I dropped all sails and started to motor off shore.  Thankfully it only lasted less than an hour but I had run before the wind to enter Pittwater.  I decided not to go in to The Basin but shelter behind the headland in America Bay.  A lovely quite anchorage. 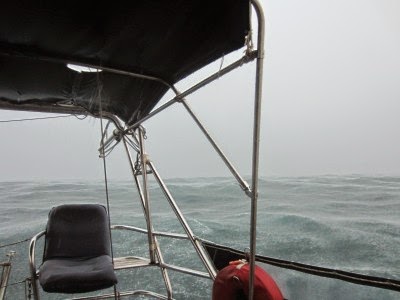 I went round to The Basic to meet Sundancer ii when they arrived after a very wet ride south along the same NSW coast as I.  Good to see them again after last meeting in French Polynesia.
It was now time for me to enter Sydney Harbour; the start of this adventure sailing around (not round) the world. It was a slow sail into the southerly and I entered through the heads on the 7 November 2014 and back to the Fish Market.  I was welcomed by the family and the youngest crew member Theo who enjoyed a short sail on the harbour. 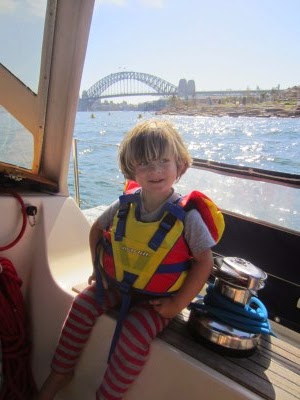 Iain came on board for the cruise south down the coast back to Batemans Bay.  We had to wait for the high tide before we crossed the river bar to enter the Clyde River and the marina.  I have been allocated a place in the rejuvenated marina.  I did not have to bribe anyone nor did I have to approach the Registrar of Cooperatives to investigate the managers.  What a refreshing change in the ten years I have been away.  I do hope the new owners have success and are able to break the strangle hold of the vested interest which have held the marina back for more than 20 years.
The Bay Post came to interview me which was an experience.  All they wanted to know was the dangers faced and the disasters.  Mine was not a great story but got printed anyway.
Malua is now undergoing a major refit and upgrade to all the little things I did not complete when I set off in September 2004 sailing south to Tasmania Hobart then on to New Zealand and the circumference of the Tasman Sea.
This blog will be updated as I achieve some mile stones with Malua.  But keep in touch either through my Facebook or Malua web site or Malua's Facebook.
Posted by Harryws at 2:53 pm No comments:

The passage from Noumea New Caledonia to Coffs Harbour Australia was 868 nm and took six day six hours about 150 hours or about 5.8 knots average speed. I motored for 100 hours or 66 % of the time. Not a great passage but I arrived on schedule with slightly less and rather more wind that was forecast.

I was called into the inner harbour at 8:30 and two Customs and Border Protection officers came aboard. One sat at the table and completed all the forms while the other asked the usual question regarding where I had been and what food I had on board. He snooped around the cupboards the opened the fridge with his bright yellow plastic bag at the ready. He took all my cheese three blocks of American vacuum sealed cheese, plus butter, milk and mayonnaise. The he started to look for meat and veg but found nothing. Again looking for honey, and any form of seeds. He had to ask advice from his senior regarding the nuts in my breakfast mix; that was Ok.

Have I any wood product. Nothing of interest except the model outrigger canoe that had been given to me by the school at Malua Bay Vanuatu. I did not give it a thought but he felt that there where some bora beetle holes and I would either have to give it up to be destroyed or have it irradiated. I took some pictures and reluctantly gave it up to be destroyed.

After a quick zap of my credit card for $380 they gave me the completed paperwork and welcomed me home to Australia. Easy, pleasant and as always in Australia expensive. When the Departments moved to a cost recovery model I argued against it as an Australian Tax payer. I said limiting the Department budget via Government allocations in the budget would force them to become more efficient and not have the fall back of just raising their fees for service every year unilaterally with out a debate in the Parliament. For foreigners I don't mind but for taxpayers it is just not on. I am pleased to see that the public servants next pay rise will below the cost of living increases.

All I have to do now is reach Sydney and then on to Batemans Bay and finally Malua Bay Australia.

A Magical Moment on Malua

Posted by Harryws at 9:16 pm No comments:

On Passage to Oz Day 6 And the wind Blew

And did the wind blow. From three days of no wind the wind increased quickly to 25 knots all from behind then at sunset it was blowing 30 to 40 knots from the NW. The seas came up so I had to run before the wind with two reefs in the main and the small staysail. This course was well off my rhum line but it did take me off the coast and out of the way of any shipping. I was happy to just settle down for the night. Malua was handling the conditions well although we would get a wave or two over the deck or along the side deck. The course would also put be in a good position when the southerly change came through in that I would be able to tack and then either reach in to Coffs Harbour if I was that far south or beat into the harbour.

The wind continued most of the night at about 25 knots then at 3:00 am it dropped. I started the engine and turned Malua's bow towards Coffs Harbour only 75 nm away. I expected the southerly front to arrive within an hour. I was not disappointed. It came upon me with steadily increasing wind from the SW at only 25 knots. I had an apparent wind angle of 120 an easy reach. At first light I had 62 nm to go and racing along on quite a flat sea at about 6 knots. Great I would reach Coffs before sunset.

The trip in was easy with a dropping wind and slight sea. I the went through the freezer. I had to through a lot a frozen meat away plus the onions and the last of the vegetables. I called Marine Rescue. Did a turn of the outer harbour and dropped the anchor just outside the inner harbour entrance. The boat was covered in salt spray but I was able to pack the sails and lines away and wait the night out. I had kept three pieces of beautiful French steak (new Zealand) and a large potato. I made French fries, onions and steak with a wine, mustard and mushroom sauce plus a great bottle of French wine. A great welcoming meal then went to bed in the main cabin to sleep till dawn.

Tomorrow I will enter the harbour and clear customs.

A Magical Moment on Malua

Posted by Harryws at 9:13 pm No comments:

On Passage to Oz Day 5 The wind came

The wind finally came at midnight Friday. A bit after the forecast but I must be off their forecast area. I soon had the main up with one reef and the staysail flying. With glee I turned the key on the engine and the noise stopped. It was an strange feeling to glide through the water with only the sound of Malua and the waves outside. The sea was not the best as it was from the north on Malua's beam so we bounced around quite a lot. No waves over the side but I had to move far down into the trotter locker of my quarter berth to find a snug position that I was not rolling from side to side but that was why I made the berth almost 8 feet long. I was soon relaxed and watching the miles fade away.

I have a decision to make: follow the direct line to Coffs Harbour or go for a position 20 nm off the coast so when the southerly comes through I can tack towards the land and make the harbour entrance. At the moment (Saturday morning) I am heading for the waypoint off the coast but I will listen to the NSW weather forecast at 10:30 am today from BOM to establish their forecast for the Southerly change, its wind strength and direction. The next decision will be if I can make it into the harbour before dark. The quarter moon is up until almost 2:00 am so I will have the light of the moon and I do know that the loom from the town lights will help me see the breakwater and Mutton Bird Island. I wonder if Coffs Harbour Marine Rescue actually listen to the HF radio. If they are anything like the crew at Batemans Bay that technology is well beyond their competence so you have to use the VHF.

Not much happened yesterday on Malua. Almost finished the biography of Moitessier. I had forgotten that he sailed a number of times to Suvorov from Papeete to spend time with John Neal (an Island to Oneself) and that he tried to start a garden on the Tuamotu atoll of Ate. He left Polynesia disillusioned by the lack of drive of the locals to improve their conditions.

I can almost smell the land.