Malua packed up for winter

There is always a story behind the headline but not told today.  Malua is in Navy Service and we are in Paris.

Cats in the Cabin 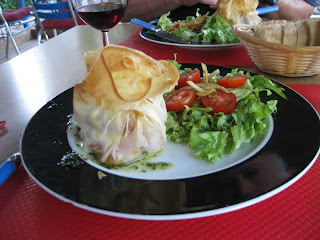 Last night – well not quite last night but I wrote this piece the day after it happened but have not uploaded it till now.  We stopped at Ardoise  We had stayed here on our way north – it is off the river up a tributary just south of the nuclear plant.  It is a back water with little traffic and a few boats tied up in a marina run by a lovely French lady.  On our first visit we did not stop at her restaurant but eat on board.  The following morning our neighbours told us about the great meal that they had at the restaurant and we should go that night.  Unfortunately we were moving on so we had to skip the meal.  Now this time when we tied up we advised the restaurant lady we would be having dinner and a great dinner it was – To start we had a pastry parcel of tomatoes, goat’s cheese and herbs followed by hare in wine sauce and a pork fillet.  All prepared and cooked by the lady.  Needles to say we had a good quantity of Cote de Rhone wine.
After a very enjoyable dinner we returned to Malua which was moored alongside a large British barge with no people on board.  The night was warm so I slipped in the lower and upper wash boards to close off the companionway and retired to bed.  At about 3:00 o clock I was woken by a noise I thought was the rattle of the wash boards.  I lay awake listening hoping to catch another noise or to hear some movement in the saloon.  I heard nothing but knew I had to get up to investigate.  Taking the touch beside my bed I entered the saloon and there on the top step of the companionway was a big black cat.  With a shout that not only woke Denny but most of the marina, the cat slipped between the wash boards and bounded down the walkway fleeing a mad captain.
Now that remind me of the last time I heard a cat noise in the night.  I was alone moored Med style to a quay alongside Charlie Girl at little Vathi in Greece.  We had been out for some food and I had returned knowing that the Greek cats like to scavenge for food on empty boats so I had closed the companion way, portlights and all the hatches.  I went to sleep with only the small portlight open a meter above the stove.  I was woken with the noise of the kettle moving on the stove.  I thought it was only the wind but after listening awhile I heard another noise.  I knew I had company.  I switched on the touch and advanced into the saloon to find a cat on the settee.  I aimed a good shot with the touch and the cat started to climb the walls, ceilings and every other place to get away.  It could not jump back through the portlight and the companionway was closed.  After a good attempt to subdue the animal with the touch I decided to let it escape through the companionway.  I removed the wash boards and advance on the cat.  There was a flash past a good swing of the touch and the cat was gone.  I closed the aft cabin door and closed the wash board and return to bed.
The following day I cast off the quay and sailed to the other side of the island for two days of relaxation while I lay at anchor about 30 meters from the shore.  The following day I sailed to Vlikho a good days sail from Kalamos.  On this occasion I again went stern too the quay and dropped the boarding plank to get ashore.  Before I left to see the island I opened the aft cabin door for the first time for four days.  I was struck by a vile cat sell.  Not wanting to investigate further I hit the high road asking my neighbour to keep an eye on Malua while I was gone.
On my return the neighbour who did not speak much English told me my cat had run off the boat and had been chased down the wharf by the local tom and I should go and look for it before it was killed.  On further investigation at the back of the aft cabin I found where the cat had lived for four days.  A mess of hair and other things brown was unbelievable.  I must have scared the shit out of that cat on the night and then locked it the cabin without food or water for four days.  It took me a week to get the mess out of the cabin and at least four weeks to get rid of the sell.
I should have learnt my lesson on that occasion but I did not expect the French cats to follow the Greek example but on this occasion I was sure it ran down the walkway.

Stop press.  Today 12 September 2011 as we were passing the Marcoule nuclear plant when a siren went off.  Denny and I joked that the siren indicated a nuclear explosion.  If the lack of water could not stop us then only a nuclear explosion could finally put and end to our trip through the French canals.
Never tempt fate!
There was an explosion at the plant at the very time we passed.  Fortunately it was an industrial accident not a nuclear accident so the chances of radiation are very low although the wind was blowing in our direction.  We continued down the Rhone and am now at l,Ardoise on our way to Avignon and Port St Lois.
More on the last step of our trip later but for now we are fine.
Posted by Harryws at 1:10 am No comments:

Equipment for cruising the canals of France

Posted by Harryws at 4:35 pm No comments:

The following has been written by our guest on Malua.   Mark & Sue. Lyon is a city nestled at the confluence of the Rhone and Saone rivers in the Rhone-Alpes department. It is a small and lovely city of warm pastel hues, old churches, a rich silk industry heritage, its buildings climbing from the river up the surrounding hills. Lyon is known for many things, particularly for food. In this wonderful country with its food obsession, Lyon is the epicentre.

We are on a boat with Harry and Denny. Our presence in Lyon emanates from one of many intersections with these dear friends, going back to our original meeting at UNE (University of New England) circa 1972.

Harry and Denny converged on Armidale from South Africa, Suzie and Mark from Apollo Bay and Sydney respectively. There began a friendship that has endured 40 odd years. By way of South Africa, Sydney as an emigration destination for H and D, and our respective journeys with jobs, kids and other life events in different places and over time, we have remained closely connected. Recent convergences at Malua, after which our host boat is named, were the catalyst for us getting together

All of this history found a new stage when we met H and D at Lyon Part Dieu station at the end of a long day’s commute from London via Paris.

Our path then takes us to Restaurant Georges, a Lyon institution. Despite its vastness, Georges is an almost perfect embodiment of the great tradition of the French brasserie, Waiters in white, service at its best, boudin noir jostling with lamb and duck as our mains arrive. Only the surprise inclusion of snails in a fish dish creates any discomfort. Georges’ own label beer, Sancerre and Crozes Hermitage complete the experience.

The Saturday riverside market in Lyon provides a wonderful array of cheeses, many from the local district, meats, fresh and cured, fish and crustacea, fruit and vegetables, fois gras, wines and other delicacies. At that point of the weekend it seemed likely to be the pivotal experience of our visit.

Pivotal in that experience was the search for the famed Bresse chicken. Unrivalled elsewhere. Harry was on a mission and after several false starts, found THE BRESSE PLACE. The bouchier offered a range for selection, Harry chose the perfect chook, and was then asked whether he wanted the head on or off. Off was the decision. The chicken was then prepared for sale, head off, organs removed and cleansed than returned with the chick for wrapping and sale. All for 34 Euro. That’s a lot of money for a chook. The reason for this investment was to marry the chicken with preserved truffles purchased in Macon. Days later this marriage took place but that’s another story.

This was enriched by a visit to the Parc de Tete d’Or near the Museum of Contemporary Art, a very tranquil park containing the Lyon zoo.

Though the Saturday market experience reduced one of our members to tears however, it paled against our visit to the Paul Bocuse Les Halles markets on Sunday morning. This market is different from the riverside one by virtue of its quality and diversity and particularly due to the eating experiences available in the market. Fois Gras restaurants, local people eating freshly shucked oysters with a small glass of pastis or wine, a large pan of paella being cooked for takeaway, with large side pans producing some of the components including grenouilles (frogs legs) and prawns. All in all, a wonderful, evocative sensory experience!

And helped by the insight provided by our friends, we observed first and second hand the French approach to customer service – their focus is only on the person being served, not allowing distractions for others in the queue (who will find their time in focus) nor anything else. All this is very different from our Australian experience.
So as rivers and friends find their confluence, here is a poem to celebrate the experience . . .

Confluence Lyon
A fusion of perspex, steel and timber. Colours and textures.
A coming together of truffles, rosemary and thyme.
Poulet Bresse and butter. Juxtaposition of modern and mediaeval.
Glass reflecting and intriguing.
Desperate consumers, shoppers teeming – later, sheltering, teeming rain.
Tranquil gardens, cycling, jogging in train en famille.
Back on board, sharing the market spoils. Making memories.
Swans sail by in pairs. Partners forever.
Posted by Harryws at 10:45 pm No comments: