Malua left French Polynesia after some difficulty with my crew member who did not want to leave Bora Bora.  I left her in the hands of the local Gendarme and set sail out into a very unsettled weather system.  I had no option but leave so off I went.  After two day the main engine started to give problems.  It was either water in the fuel or the fuel was contaminated.  The end result was I could run the engine to charge the batteries but not move the boat forward.  Not a big deal in a sailing boat however there was no wind so I just sat and waited.
Be careful for what you wish for. 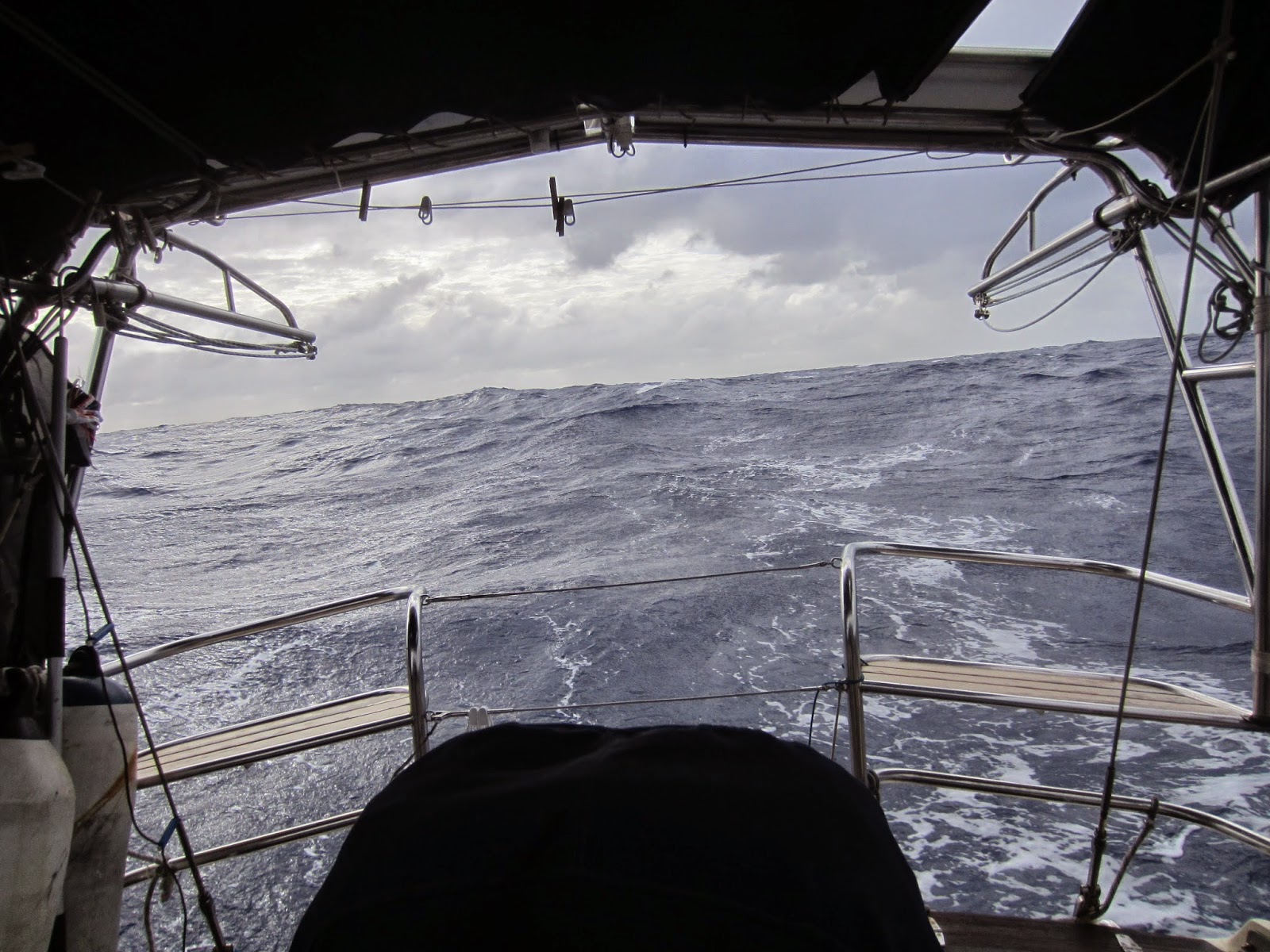 On the third day out, at dusk, the wind started to rise.  By midnight I watched as the wind rose from right astern, first 20, OK put in one reef, then 25, OK put in the second reef and furl the genoa, then 35, well it cant go much higher.  The boat is no doing 8 to 10 knots down wind.  This is where singlehander lethargy sets in. You do nothing either because you are tired or you think it will get better.  When the wind was at 40 I decided to take the third reef in but did not move from my captains chair.  It was then the wind rose to 45 and then 47 and BANG the sail tore between the second and third reef points.
Now it was a question of taking the sail down.  I stepped up into the cockpit and started to move forward when a large wave washed all over the port side of the boat.  Time to clip onto the life lines, turn all the outside lights on and secure the sail.  Not a difficult job because Malua was still running before the wind and waves.  The autopilot handling the situation well.
When the sail was secure I only had a small furled staysail out and Malua was still doing 5 to 6 knots along the rhumb line to Tonga - 6 days away.
I slept well the rest of the night but by morning the seas from east of New Zealand had built to a massive 5 to 6 meters.  Thankfully quite ordered and pushing me in the right direction.
That afternoon while I was in the captains chair at the nav station the boat was slam 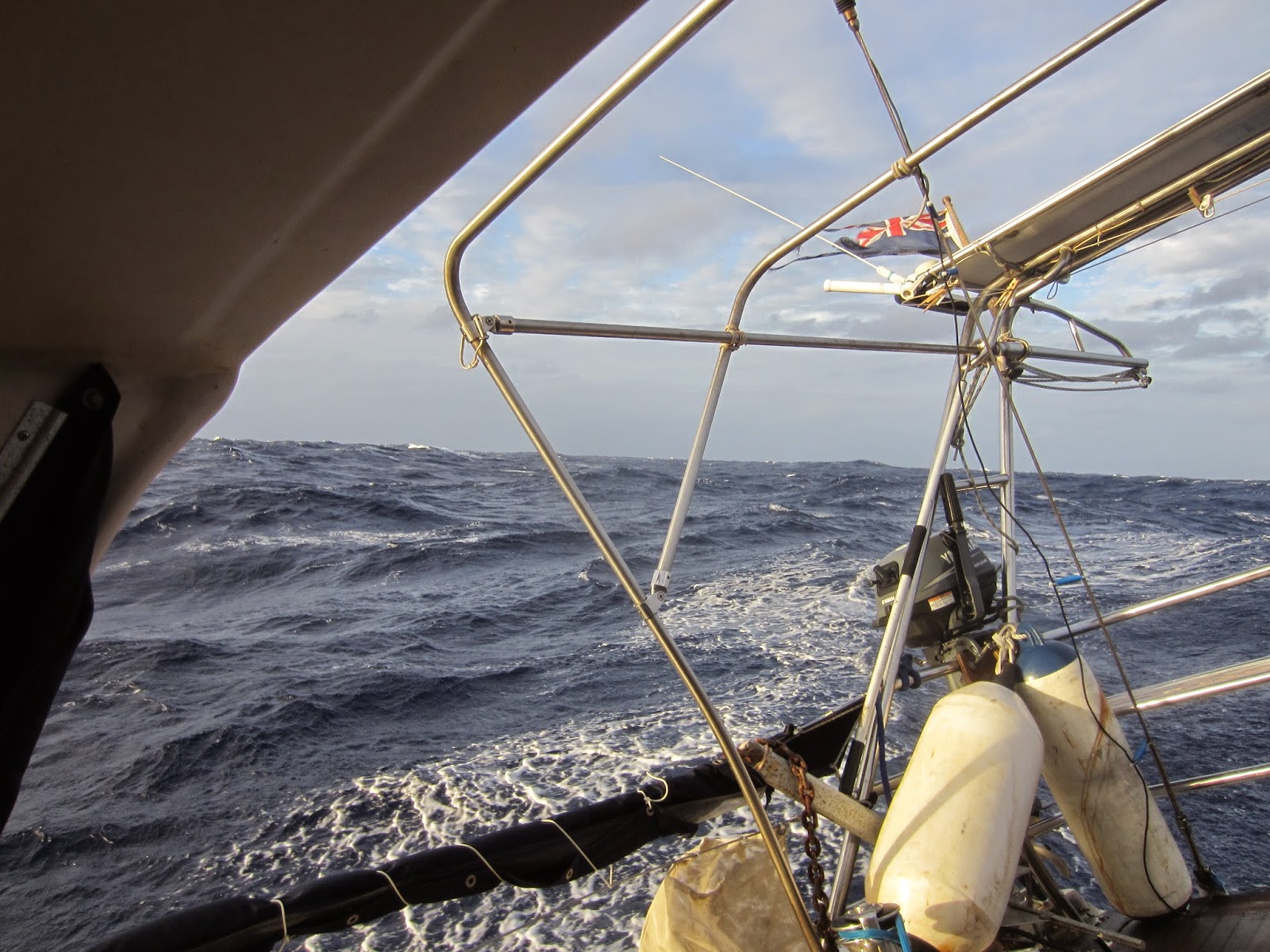 med over to the starboard side by a huge wave.  The doraid vent over the stove started to flood water and I found myself on my side underneath a waterfall of seawater coming through the closed companionway hatch. Before I realized what had happened Malua had righted herself and I was drenched through.
I set about getting rid of the water by sweeping it into the bilge.  Days later I was to find the batteries swimming in a sea of water in their purpose built battery compartment. There was water everywhere in the aft section of Malua. My quarterback was wet so was things and bed sheets. The final water damage would be revealed days later.
I then realized that there was something flapping in the cockpit.  I opened the companion way and looked out to find all the canvas from the bimini and weather cloths ripped to pieces.  The two fenders secured at the stern had gone.  The stern anchor tied to the lifeline was over the side attached to the boat at the end of the anchor chain.  The life recovery ring was trailing astern on its line.  All the sheets and lines kept in the cockpit and under the hard dodger we somewhere else.  It was a mess.
Luckily it was light so I set about retrieving the things trailing overboard and securing the other lines in their correct place.
I was to find out later that the engine fan vent located in the cockpit had been flooded along with the large cockpit locker containing the one outboard engine.  The other on the rail had had a good sea water submersion. 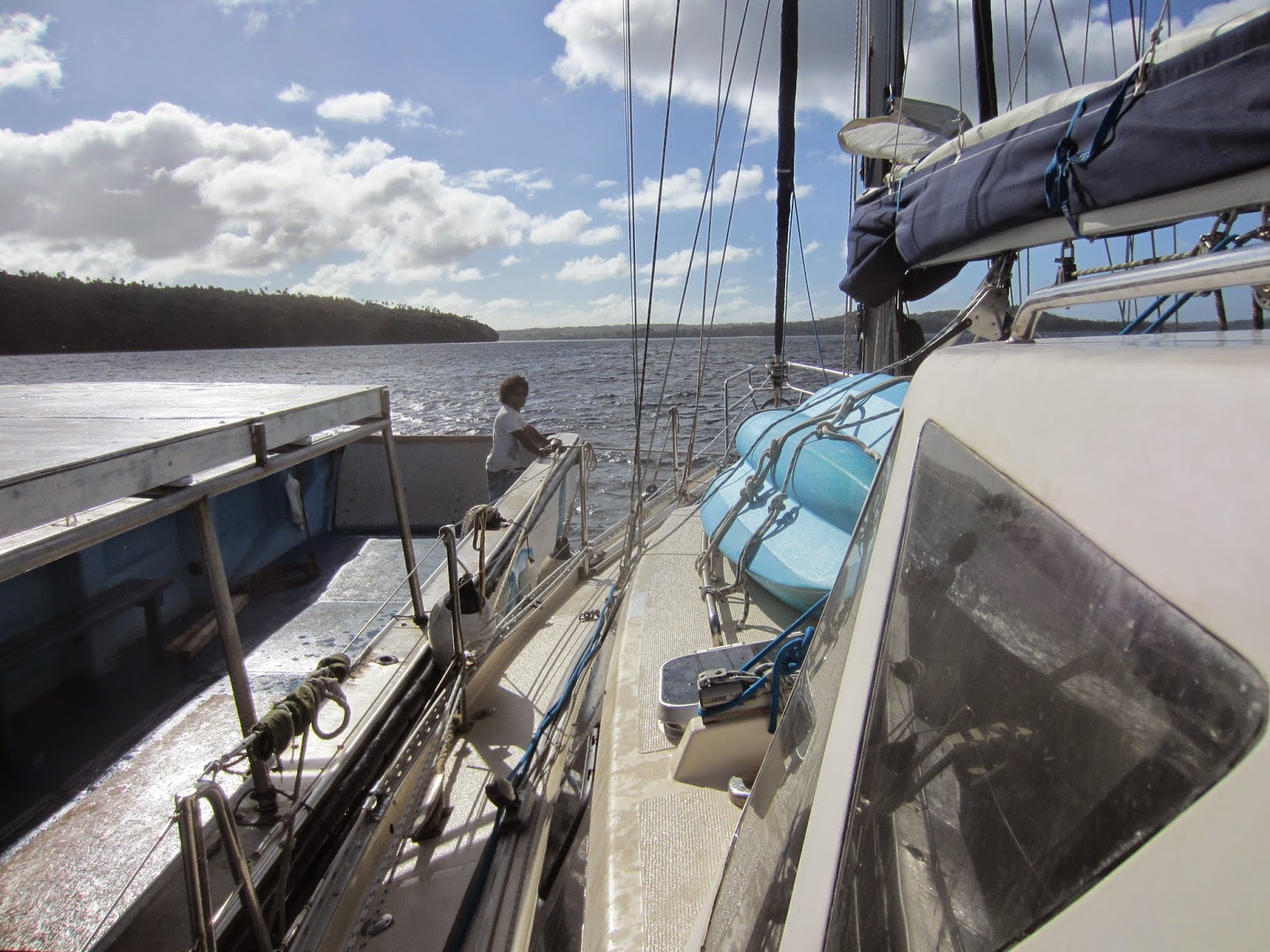 What could I do. Just run before the wind with only the small furled staysail to give me direction and drive. Five day later I was off the northern tip of Tonga hoping for a tow into the harbour by one of my friends.  You soon find out who your friends are.  I had to take a commercial tow and a mooring buoy in Niefu harbour.  Relieved that I had made it to a place where I could get the engine fixed and repair the sail. That is a story in itself.
Posted by Harryws at 12:14 pm No comments: