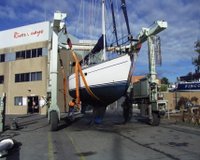 After the setbacks of the bar and Ulladulla slip I felt it was time to make some progress. I called River Quays to see if they had a free slot to lift Malua out of the water using their travel lift. Friday would be OK. With the weather forecast of wind from the south at 15 to 25 knots it was a great invitation to take off for Sydney. I left Ulladulla at noon on Tuesday with the breeze behind me. This wind continued all afternoon and right through the night. I had the full main up with the genoa on the spinnaker pole. This continued all night. It was a great down wind sail.
I arrived outside Sydney heads at about 5:00am and set a course for Balmoral Beach to put the anchor down for a few hour sleep. The sun was just below the horizon as my head hit the pillow. I slept for a few hours then picked up the anchor and motored under the bridge to Blackwattle Bay under the ANZAC bridge right next to the fish market.
I again dropped the anchor next to Tiaki – Peter and Jenny who I had met during their stop at BB on route from South Australia. That evening we had a great meal at the local pub.
The following day I motored up the river to River Quays who lifted me out of the water on Friday using their travel lift. Was I relieved to have Malua out the water.
No to get on with the reason for all this effort. The replacement of the shaft bearing in the skeg. Stuart had helped me make a set of pullers to remove the flange next to the flexible joint where the shaft attaches to the engine. This came off with ease – a dream. I then removed the Autoprop propeller. Again with a purpose built puller. Now the real job. The bearing in the skeg. The shaft was removed and I put the puller threaded rod through the bearing and set up the pipe spacer on to the skeg. By turning the threaded rod the bearing slowly moved out of the skeg into the pipe. It was a tough job – taking almost two hours of solid effort. Finally the skeg dropped out. I had catch a taxi to D H Porter to swap the bearing I had for a narrower one. This then was forced back into the skeg with the puller reconfigured the other way round.
No push the shaft pack through the new bearing. It would not fit. The compression of the bearing in the skeg had reduced the size of the hole. Simple process of reaming out the hole to suit the shaft. A great fit.
Next was to reattach the engine flange, dripless bearing and the propeller. I regreased the prop. During all this activity I was washing the antifouling and applying 14 liters of Micron Extra to the hull. That was two coats with a bit extra on the leading edges and around the rudder.
On Monday morning I was lifted back into the water and motored to Blackwattle Bay to wait for the compass adjuster.
Posted by Harryws at 10:33 pm No comments:

At the second attempt we motored over the Batemans Bay bar at 4:30 in the afternoon. There was a little bit more water and I think we took a better route. Stuart and Richard were rather relieved. The trip to Ulladulla was rather uneventful in that there was no wind, as a consequence we had to motor all the way with the autopilot doing the work. We arrived at 10:30 pm and logged off from the local Coastal Patrol. We then secured Malua along side a yacht which had sailed from Tasmania and were on their way north. Fortunately they had not gone to sleep so they helped us with our lines. After the early mornings start and excitement we all turned in and slept uneventfully through to the next morning.
The crew left in the morning to drive back to Batemans Bay. I cleaned up the boat before Denny arrived to take be back to the house. I arrived the next day to prepare for the evening’s slipping. I measured up the cradle and then made marks on Malua where the cradle should go.
Just before the top of the tide I motored over to the slip and waited for the manager to let the cradle back into the water. I then motored up on to the cradle. It was obvious that I had not made the marks and more water was needed for Malua to sit correctly on the cradle. I secured lines to the cradle and winched them as tight as they would go. Not a slight movement.As the tide was about to go out I for the second time in a few days, I had to back out of being stuck without sufficient water. With the engine in full astern the boat was not moving. I had to take the lines attached to the cradle forward and use the windlass to pull the boat off the cradle. What a relief to be free floating again. What to do next?
Posted by Harryws at 6:48 pm No comments:

Aground on Batemans Bay Bar

With no success with the local marina management I decided to sail north to Ulladulla to put Malua on their slip. I was accompanied by Stuart and Richard. The high tide was at 5:30 am so we decided to leave the dock at six. We would be just a few minutes after the top of the tide. I had plotted a course slightly south of the leads because I knew that NSW Maritime could not move the leads to show the best passage across the bar. We moved slowly towards the bar expecting to touch for a few moments as we crossed the bar. Well be hit the bar OK and didn’t move off as expected. Luckily it is just sand although rather well packed. I applied more power and hoisted the main and genoa to get the boat to lean and reduce the draft. There was a slight swell which assisted our forward motion but we seemed to be going nowhere. The boat was solidly aground.
After about 30 minutes and the reality of the tide falling I thought it prudent to contact the BB Coastal Patrol to give us some assistance. We continued to drive forward moving the vessel slightly NE. We were starting to heel but not make any progress. We took stock of the situation and started to look for deep water which much to our surprise was sighted off the port quarter.I put the engine astern with full throttle, hoping that the swell would lift us off. Fortunately Malua broke free and we went astern into some deeper water. Not wanting to chance our luck any more we steamed back towards the breakwater. At that point the Coastal Patrol vessel appeared much to their disappointment. We drew alongside and thanked them for the offer of assistance. We steamed back into the Marina to wait for the afternoon tide which would give us an extra 400mm.
Posted by Harryws at 4:12 pm No comments: