While cruising one's senses are heightened and sight, sound and sight are improved from the time one was within the rat race. When did you get up in the night if a door banged closed or the wind rose. The same can be said about sound. I believe one becomes very aware of the sound of your yacht at anchor, sailing and under way. Malua has a 50 hp diesel engine which has performed very well in the Mediterranean. I designed the exhaust system to handle sailing in flat and rough water.
When we were motoring towards Previsa I noticed a change in the tone of the exhaust and looked over the side to find the amount of water coming out of the outlet had reduced substantially. 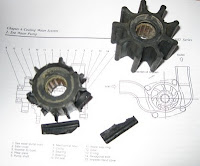 After anchoring I investigated and found the raw water impeller blades had disintegrated. Having a replacement in the store I was able to install a new impeller immediately. I now have to get a new impeller from the local supplier.
Some people believe the impeller should be replaced annually. I think this is good but unnecessary. It depends on where you sail. While sailing in Venice there was a lot of sand and mud. This caused the impeller to wear faster. One should have a grill on the through hull and a filter soon after. These will catch larger items but not sand and mud.
How do you know when the impeller has gone?
Listen and watch the raw water exhaust outlet.  If you don't notice the raw water the temperature gauge should tell you or a sound alarm will (if you have one).
Posted by Harryws at 1:37 pm No comments: 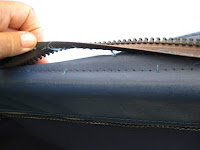 Cruising has been said to be the performance of maintenance in exotic places or word to that effect. Having fitted out Malua from a bare hull in 2003 I was not prepared to do any more maintenance work except on a Sunday - my day of rest from sailing through the Pacific. Luckily very little needed attention so I could relax and enjoy the South Pacific. Malua is now in the Mediterranean and time has moved on. The marine environment is starting to take its toll. Most of the electrical seawater pumps have had to be replaced while the fridge sea water pump is leaking and is corroded. The rubber valves (duckbills) in the Sealand vacuum toilet have lost their flexibility and only just close while the stitching on the canvas of the bimini is starting to come apart.
So while back in Australia I have again activated my trade accounts and stated to restock the spares store. The items required are
. Repair Simrad autopilot
. Replace wind instrument at mast head
. Seawater deckwash pump
. Seawater internal pump
. Isotherm fridge control unit
. Isotherm seawater pump
. Yanmar raw water impeller
. Yamaha 8 HP water impeller
. HF radio external antenna cable
. YKK zipper and sliders
. New Australian flag
. Muir anchor counter magnet unit

The first item Simrad has given me the most problems because the Navico distributor would not take my unit in for service because it was 8 years old. The resolution to that issue is a story in itself... for another day.
Posted by Harryws at 10:30 am No comments:

While preparing Malua to go back into the water at Marmaris in 2007 I was kindly given a used 45Kg Rocla anchor. I lifted it off the dock and walked towards Malua across a puddle of muddy water. I only got half across when my feet slipped from under me and I fell backwards. While going down I managed to throw the anchor to one side but I landed on my right elbow. It was very soar for about two months and I found I could not lift my arm above my shoulder for the rest of the season.

The following season I applied antifouling to the underside of Malua much to the stress of my right shoulder. During the season it got so lame I could not lift it up to the top of the wheel. On returning to the Australia I visited the Orthopaedic surgeon who immediate diagnosed a rotary cuff or long head of the bicep tear of the ligaments. 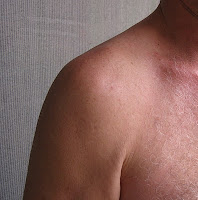 In my case he said it was fixable after establishing which was the exact ligament that causing the pain. After an ultra-scan and a MRI (you know lying in a small tunnel while a large magnet spinning around you) and many dollars later I was booked into the local hospital for a shoulder reconstruction. 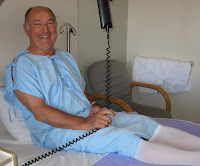 The week before Christmas I checked in and went under at about noon. The number of checks to confirm that it was in fact my right shoulder that they were operating on (surgeon draws large arrow on shoulder with permanent marker) was reassuring. 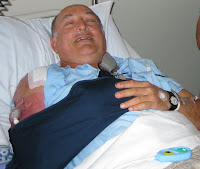 I came round about 300pm feeling very thirsty but no pain. That was to come later. After a reasonable night sleep I was given a hearty breakfast which I enjoyed but did not keep down for more than half a hour – not as bad a seasickness but the same effect. I was instructed to keep my arm in a sling for six weeks. Well can you imagine me doing that. Impossible. I must say though that I did not use the arm effectively for almost three weeks and the muscles have wasted. The pain is still here six weeks after the operation. 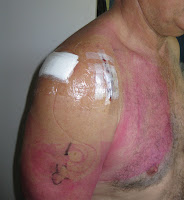 I am now out of the sling, doing exercises four times a day. At the moment I am trying to get the range of movement back but soon it will be building up the muscle and the strength. No more anti fouling this year.

While I was building Malua I had a medical set back and while I was in hospital all I could think about was how large the power winches would have to be to get me back on the boat. I installed the winched but recovered not to have to use them. Well this season I will have to use them! 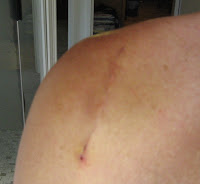 Posted by Harryws at 1:27 pm No comments: