Time Passes and we achieve little 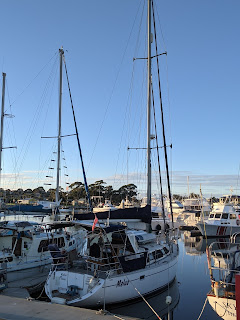 BUT there have been bushfire along the south coast of NSW with Bermagui being enveloped in a thick cover of smoke and black ash.  Malua was almost black from the deposit falling from the sky.  Thankfully live embers did no damage although some vessels had holes burn in their canvas.  Cleaning the ash off Malua took weeks and weeks and I still find a burnt leave under some part not yet properly cleaned.

The smoke had a serious impact on me personally and I lost 8 hours one night.  I was lucky to wake up and drove immediately to Canberra Hospital emergency ward but that is a story in itself.

Yes then there was the COVID-19 lock down when the state borders were closed and even our national border prevented us leaving or reentering not to mention the shutting down of the Pacific island boarders.  So what did we do? well started to undertake the rejuvenation of Malua that had been started previously and try to tick-off the to-do list starting with the most difficult.

I will not list the jobs but it is extensive and thankfully did not cost a lot of money because I did most of the work.  The major milestones where a survey, gas certificate, new saloon upholstery, new starter battery and new instrument panel at the steering wheel.

The replacement cockpit canvas has always been a major diplomatic battle to try and get the tradie to actually start and then finish the job not to mention just do it right.

After all the above I think it is time to reevaluate the joy of cruising as the world gets back to normal.  Malua will do a cruise north along the NSW and Queensland shore to again see if this is the lifestyle.  Part of the evaluation is to test the market regarding the sail of Malua an ocean cruiser against the market  which appears to want a saleable asset that they can determine the value from some red book and sell the next weekend plus it must be large like a unit and not rock in the swell!

I have created a web site with all the boats features and an extensive photo library.  A broker has been chosen but not appointed.  So watch this space as I cruise noth with a big FOR SALE sign on the side of Malua.

Posted by Harryws at 3:46 pm No comments:

Let the sailing begin and the fun and socialize. It is great to meet friends from the past. Windflower was at the 2004 Regatta along with a few others. You soon realise that your sailing experience is just average when you talk to some of the others here at Musket Cove. They have sailed the world. There are still the wet behind the ears group but all have sailed at least one ocean.
A magical moment on Malua 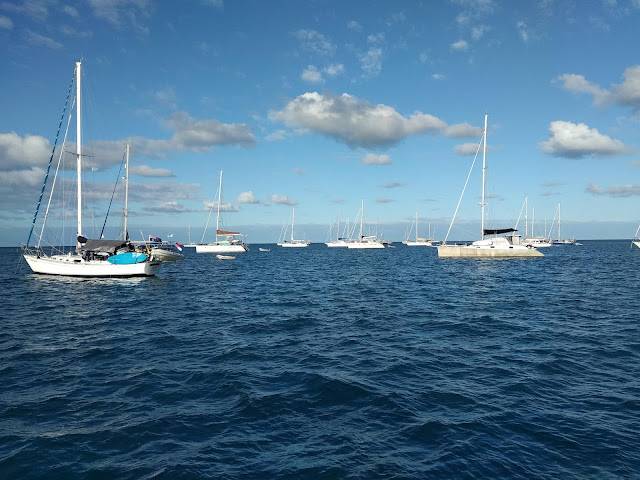 Posted by Harryws at 5:29 am No comments:

View my complete profile
All men dream, but not equally. ...the dreamers of the day are dangerous men, for they may act on their dreams with open eyes, to make them possible.
T E Lawrence